"With A Bang" was named one of the 40 Best Releases of 2011 by the good people at the Riverfront Times. Read all about it here!

Blind Eyes | With A Bang

The Blind Eyes' With A Bang does not have to be as strong as it is. The band's sophomore album would be decent enough if Seth Porter were a less engaging vocalist with fewer grandiose Elvis Costello-ish leaps in his melodies, or if Kevin Schneider's bass lines merely parroted the guitar chords, or if drummer Matt Picker's dynamics were less driving. "Into The Breach" would still be an excellent rock song, even if Porter ended the chorus after repeating the title instead of sealing the deal singing "being fooled all the while!" with the exuberance of a second grader's solo at a school play. The band would be adequate if it chose to sound like The Strokes or Thin Lizzy or Ted Leo & The Pharmacists rather than cherry-picking from its influences to build a power pop Decepticon, or if it continued as a trio instead of adding Andy White on guitar to harden the rocking of its live shows. We might still be nerding out over the band at the end of the year if the group had made a good record. Luckily, The Blind Eyes made one that, months after digestion, is still damn near perfect.

Key Track: "The Nature Of The Beast"

Place You're Most Likely To Hear The Artist: In a perfect world, the opening credits of every coming-of-age PG-13 rated teen comedy ever made.
Posted by The Blind Eyes at 6:47 AM No comments:
Labels: news, press

PBS did a feature story on the band for their 2011 Fall Arts Festival series, and you can check it out here! Thanks to Angela Antkowiak for making it happen, plus Nick Aquisto for all the nice words. Thanks also to the set of Donnybrook for staring at us the whole time and making us feel inadequate.
Posted by The Blind Eyes at 12:07 PM No comments:
Labels: press, video 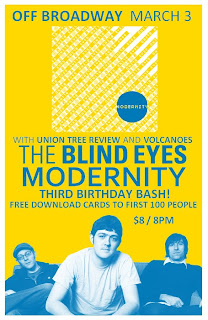 Our debut album is almost 3, and we figured that was as good a reason as any to have a show! Off Broadway, 3/3 (get it?). We'll be handing out free "Modernity" download cards to the first 100 people in the door, the show is only $8, and our good friends Union Tree Review and Volcanoes are also on the bill! It'll be your last chance to see us in STL until probably June- May at the earliest- so be there.

Posted by The Blind Eyes at 7:35 AM No comments:
Labels: modernity, shows 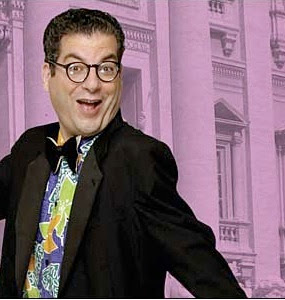 We were very pleased to find ourselves on the list of winners of the Village Voice 2011 Pazz & Jop albums poll. With A Bang came in at a robust 419th place (that's behind Britney Spears but ahead of Kelly Clarkson for those keeping score at home). We assume our invitation to party with Michael Musto is forthcoming.
Posted by The Blind Eyes at 6:46 PM No comments:
Labels: news, press
Newer Posts Older Posts Home
Subscribe to: Posts (Atom) 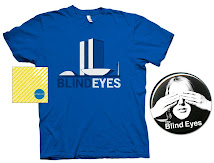